I just want to play one damn game of boggle on my phone before bed. Come on. 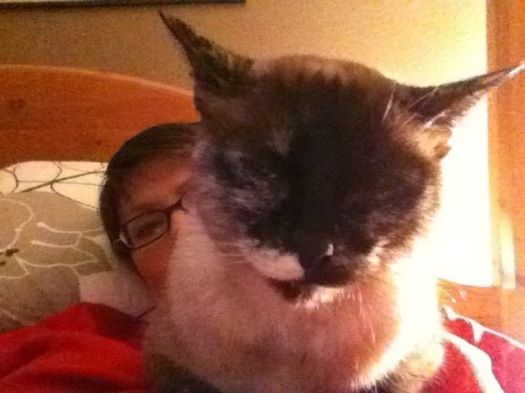 Any time I have to leave Austin for more than two days means that I have to take these assholes with me, either to a friend’s house, my parents’ house…or wherever else I go.

No problem, right? Put a cat in a kennel and it’ll sleep, right? WRONG. My cats, at least, will throw up and crap 100% of the time if they’re in a kennel. I stand a better chance if I let them roam.

Quigley forgets he’s ever been in a car each time he’s back in a car. Seriously, this cat’s life is like 50 First Dates always. He walks around the car shrieking for about the first hour. Then settles into sleeping in the litter box for usually the remainder of the trip, until he has to crap. Which entails me reaching behind my seat, scooping the litter box, and throwing it out of my window. All while maintaining my 80 MPH and trying not to throw up all over myself. Sometimes he throws up. Sometimes he doesn’t. That’s a total crapshoot.

On our most recent road trip, this is how Quigley decided to sleep. Awkward?

Browning is usually pretty good. He falls asleep on my lap in the first ten minutes and generally stays that way until we get to wherever we’re going.

Not this trip. He decided to be a complete and total douchebag. He fell asleep on my lap for about an hour. Then decided to sprint to the backseat. This usually means one thing: he’s going to puke.

So, instead, I smell the aroma of crap about three minutes later. Then the rustling of a bag of gifts. Naturally, I’m thinking, “Wow. This asshole has managed to shit on Christmas quite literally this year.” Instead, he has crapped strategically on a beer coozie laying on my floor board, and he was only trying to be considerate and drag the bag of gifts over to cover it.

After this is done, he decides to hop back up on the back seat and start puking. If you’ve never heard a cat throw up, pray you never do because it’s quite honestly the worse sound I can think of right now. After this is done, I decide it’s time to pull off the road at a gas station and try to salvage my car.

As luck would have it, said gas station has no paper towels. So, being the MacGyver I am, used tissue paper out of a gift to clean up the unmentionables, and wipe the drool off his stupid face. The below picture is right before I cleaned him up, because I’d like to ruin any chance he might have for a career.

After writing a novel about my evil Siamese on this blog last night, I was exhausted and couldn’t wait to crawl under the covers in my big comfy bed. I walked into my bedroom and flicked on my lamp only to find this lying in wait for me on my bedside table:

So much for a peaceful night’s sleep.

Obviously this isn’t one of our cats…but it has a penis on its face and that’s funny.

Or so my cat thinks.

So we’ve talked before about how much my Siamese cat (Isis) hates me and resents my very existence, but we’ve never really gotten down to the reason behind that impassioned hatred. You may think that cats don’t need a reason for why they like or dislike something; you might think that they are just animals with tiny brains and no reasoning skills or capability for rational thought. Well, tiny brains notwithstanding and also despite the fact that they look stupid most of the time, cats are actually very bright. And when I see Isis look me in the eye, I can see that she’s reasoning, she’s calculating…she’s working things out, much like that raptor in Jurassic Park was working things out right before she ate that guy. She’s envisioning her life without me, and she has decided that the grass is definitely greener…and preferably my decomposing body in a shallow grave is what is fertilizing that oh-so-green grass.

Now I consider myself to be a feminist, but it’s a well-documented fact that women, in general, are very competitive with one another. And maybe society or Hollywood or Cosmo has made us this way by constantly shoving down our throats that we have to do this or that to keep our man from cheating on us with some other ho-bag that does this or that better than we do…but whatever the reason, deep down we all kind of hate each other’s guts just a little bit. What you may not realize is that this competitiveness and not-so-secret hatred transcends species. I’m not just talking about how female peacocks or narwhals fight it out in the wild over the male with the prettiest tailfeathers or the sharpest whatever-the-fuck-those-things-are-on-a-narwhal’s-head (antler? unicorn horn?). I’m talking about how my goddamn cat hates me because we’re both female and therefore must compete for the affections and attention of the men that come into our house.

Isis loves men. LOVES. MEN. She’s actually kind of a slut in that she doesn’t really discriminate whose lap she sits in, as long as that lap is attached to a dude. I think it’s because I never got her fixed. And that has never really been a problem, except for when she’s in heat and caterwauling around the house all night and oh yeah ALSO WHEN SHE IS TRYING TO MURDER ME. For whatever reason, this cat sees me as a her competition. While she doesn’t seem to quite understand that I am human and she is feline, she very much understands that I am a chick and she is a chick and therefore we cannot coexist peacefully as long as there is male attention to be had.

As I said before, Isis desires affection and attention from all men, but there is one man in particular that captivates her cold black cat heart. In this blog, he will be referred to as The Dude (partly to protect his identity, partly because he will appreciate the Lebowski reference, and partly for the blog’s consistency in case The Dude should be replaced by some other dude–haha sorry, dude). In her tiny little cat brain, Isis and The Dude make the perfect pair. She sits in his lap and massages his chest and sometimes cleans his beard, and in return he pays attention and talks to her. It’s what every woman wants from a man (I barfed a little bit typing that just now). Of course, I fuck up this beautiful little relationship because unfortunately for Isis, The Dude also talks to and pays attention to me (and I don’t have to clean his fucking beard). Isis reacts to my presence in this equation in different ways. Sometimes her attempts to get rid of me are overt: slapping me in the face to shut me up, sitting on my chest/face to probably try to smother me, attacking me in the bathroom when I’m at my weakest, lying in the floor in a darkened room so I will trip over her and hopefully die of a head wound. But most of the time, Isis stays true to her female self and resorts to subtlety and passive-aggressiveness.

When I went to bed last night, Isis was not only laying on my side of the bed, she was actually laying on my pillow. As you can see, she is also holding hands with The Dude.

While watching tv the other day, I glanced over and realized that not only was she not actually asleep on his lap, but she was in fact staring straight at me and giving me a total shank-eye. It’s like what girls do in a bar when they’re dancing with a dude but not even paying attention to him because they’re watching the girl they dislike to make sure she sees what they are doing and is totally jealous.

This one doesn’t even require commentary from. Just see for yourself. I’m starting to think he’s actually going along with her and is encouraging this catty behavior (zing!).

I’ve blogged about how Browning and Quigley go out of their ways to attack me when I’m using a nail file. Refresher: 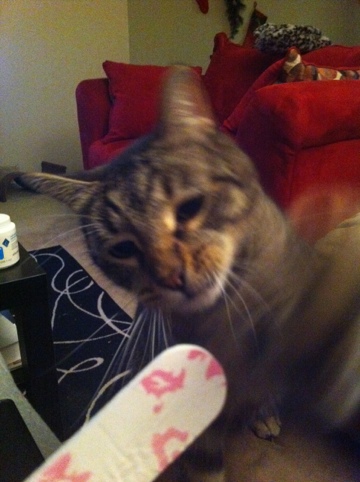 So I tried using a different nail file to avoid being bothered. After I was finished, I put it on the coffee table. 3 seconds later, this asshole is on the table batting at it. 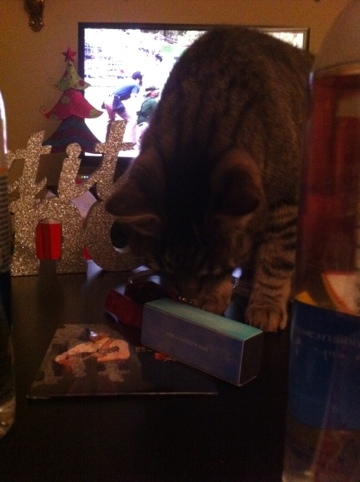 He continues this for about 3 minutes, and then gets this weird look on his face that he always gets before he yacks something up.

So, he started yacking. On my file. On my coffee table.

Cats are notorious for taking, drinking, eating, scratching, spilling, and sitting on anything that’s yours.

As it turns out, these little furry douchebags can’t taste sweets, so my eggnog was a complete bust for him.

I can’t see the tv and also, you’re crushing my sternum.

Caption redacted even though everything about the last episode is literally all over the internet 🤗
The naughtiest ornament on the tree 🎄
Numbers 1 and 2 on the Naughty List this year 😈
Isis 1/6/2006 - 11/26/2022 ❤️❤️❤️ Thank you for being with me for so long. You are loved and will be missed.
Please send good vibes for our Isis kitty… she is almost 17 and seems to be winding down (this pic is from 2 years ago). It’s been a tough week for her and a tough year for us with the kitties. We’re going to take her to the vet on Monday to see what we can do to help her be more comfortable.
Loading Comments...