Any time I have to leave Austin for more than two days means that I have to take these assholes with me, either to a friend’s house, my parents’ house…or wherever else I go.

No problem, right? Put a cat in a kennel and it’ll sleep, right? WRONG. My cats, at least, will throw up and crap 100% of the time if they’re in a kennel. I stand a better chance if I let them roam.

Quigley forgets he’s ever been in a car each time he’s back in a car. Seriously, this cat’s life is like 50 First Dates always. He walks around the car shrieking for about the first hour. Then settles into sleeping in the litter box for usually the remainder of the trip, until he has to crap. Which entails me reaching behind my seat, scooping the litter box, and throwing it out of my window. All while maintaining my 80 MPH and trying not to throw up all over myself. Sometimes he throws up. Sometimes he doesn’t. That’s a total crapshoot.

On our most recent road trip, this is how Quigley decided to sleep. Awkward? 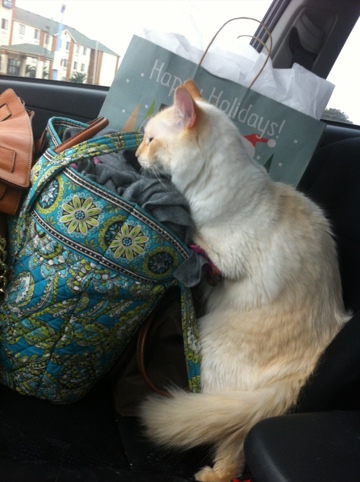 Browning is usually pretty good. He falls asleep on my lap in the first ten minutes and generally stays that way until we get to wherever we’re going.

Not this trip. He decided to be a complete and total douchebag. He fell asleep on my lap for about an hour. Then decided to sprint to the backseat. This usually means one thing: he’s going to puke.

So, instead, I smell the aroma of crap about three minutes later. Then the rustling of a bag of gifts. Naturally, I’m thinking, “Wow. This asshole has managed to shit on Christmas quite literally this year.” Instead, he has crapped strategically on a beer coozie laying on my floor board, and he was only trying to be considerate and drag the bag of gifts over to cover it.

After this is done, he decides to hop back up on the back seat and start puking. If you’ve never heard a cat throw up, pray you never do because it’s quite honestly the worse sound I can think of right now. After this is done, I decide it’s time to pull off the road at a gas station and try to salvage my car.

As luck would have it, said gas station has no paper towels. So, being the MacGyver I am, used tissue paper out of a gift to clean up the unmentionables, and wipe the drool off his stupid face. The below picture is right before I cleaned him up, because I’d like to ruin any chance he might have for a career.

One Reply to “Road Tripping”

GET IN MY CAR
Also what it’s like to be in a relationship with me 😎
my vibe when I decide to go to bed at a normal hour instead of spending hours reading strangers’ arguments in the comments on meme pages 🌱🧘🏼🌸🐱
Hi, everything is totally normal over here 👋 🙃
Even better when you’re wearing a romper and are now in there fully naked 😾🤷🏼‍♀️
TGIF 😎
%d bloggers like this: