As the title of this blog suggests, my cats are dicks. It’s like they exist for the sole purpose of inconveniencing me and breaking my belongings and acting nonchalant and bored about everything. But what is fascinating to me and has always fascinated me about cats is their incredibly distinct personalities. I feel like with dogs you always get the same thing (“I LOVE YOU I LOVE YOU PLEASE DON’T EVER LEAVE ME I LOVE YOU I AM A GOOD DOG WHO LOVES YOU”)….but it’s not the case with cats. I’ve got one cat who thinks I hung the damn moon, another cat who is most likely trying to smother me in my sleep, and another who couldn’t give less of a fuck that I exist. And they are all evil little creatures who make my life hell (even the one that is madly in love with me), but they do it in such varied ways that sometimes I forget that I’m dealing with the same species in each of these cats.

My cats’ personalities are so distinct that I can typically predict how they are going to react to any given situation or circumstance. For example, Isis is a crazy neurotic demon cat. Getting Isis in her crate to go to the vet is like trying to put a Christmas sweater on a honey badger; you better be prepared for lots of spitting, hissing, clawing, blood, and tears (her claws are like tiny little needles and they fucking HURT). I’ve actually had to get the vet to make house calls to deal with her because it is nearly impossible to get the cat to do something she doesn’t want to do. So I’ve learned that Isis does not like new situations and really does not like being out of her comfort zone; any new experience immediately causes her to go into freakout meltdown mode. Several years ago when I lived in an apartment, I tried to let her out on the balcony. Being the neurotic psycho that she is, Isis flipped shit and promptly ran straight between the railings and fell three stories. Since then, I’ve left Isis in the house where she so clearly prefers to be and I’ve been very cautious about letting Isis anywhere near the outdoors.

Ernest, however, operates under the delusion that he is in fact a wild jungle cat that should be free to roam the great outdoors. Since the weather has been so nice lately, I’ve been opening the windows on my house to let the niceness inside and replace the pervasive cat smell. The only problem with opening the windows is that I know it causes Ernest to go BESERK. Something about the smell of the outdoors drives him wild…he starts meowing and running in circles around the house and rubbing himself all over the window screens. Occasionally we will let him in the backyard (and by let him in the backyard, I mean he will sprint out the backdoor before I can stop him). Being the cheetah or lion or whatever he believes himself to be, he then runs around the backyard doing things like this: 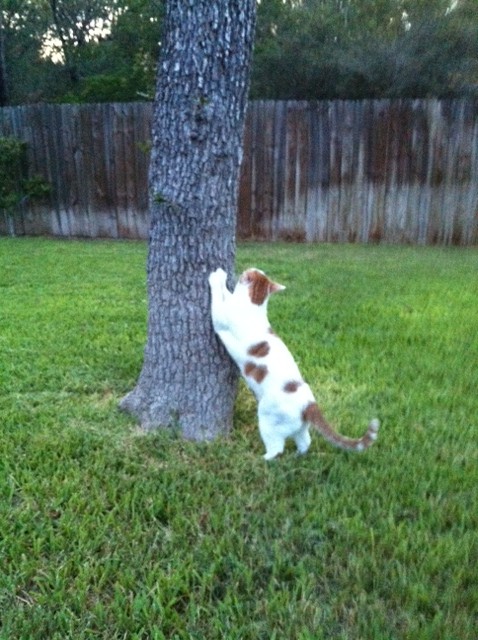 He will then proceed to roll around in the flower beds and run from me when I try to catch him. I can’t let him stay out long because he gets dirty as hell and will try to jump the fence if I’m not fast enough. You know, because it’s so terrible living inside where someone feeds you and cleans up your poop. He has such an awful life, no wonder he wants to live in the wild. Once he’s back in the house, he meows for awhile to let everyone know about the injustices he’s suffered and then he’ll sit in the window and shoot me dirty looks until I come inside (Jaegar joins in too because cats love giving dirty looks): 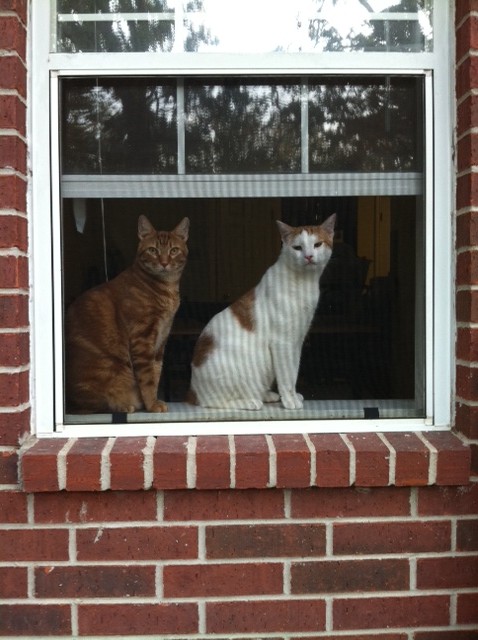 I’m sure we will continue to play this game as long as one of us is alive. I will continue to open the windows, he will continue to lose his goddamn mind over it, and he will try to escape living with me any time the opportunity presents itself. It’s just in his nature…..just like it is in Isis’s nature to hate me and everything I do….and just like it’s Jagaer’s nature to love me so much that it annoys the crap out of me. I can’t change them and I just have to accept them as they are….douchebag animals that exist only to inconvenience me and ruin my stuff.

Caption redacted even though everything about the last episode is literally all over the internet 🤗
The naughtiest ornament on the tree 🎄
Numbers 1 and 2 on the Naughty List this year 😈
Isis 1/6/2006 - 11/26/2022 ❤️❤️❤️ Thank you for being with me for so long. You are loved and will be missed.
Please send good vibes for our Isis kitty… she is almost 17 and seems to be winding down (this pic is from 2 years ago). It’s been a tough week for her and a tough year for us with the kitties. We’re going to take her to the vet on Monday to see what we can do to help her be more comfortable.
Loading Comments...
%d bloggers like this: