Nothing, but this is still funny. 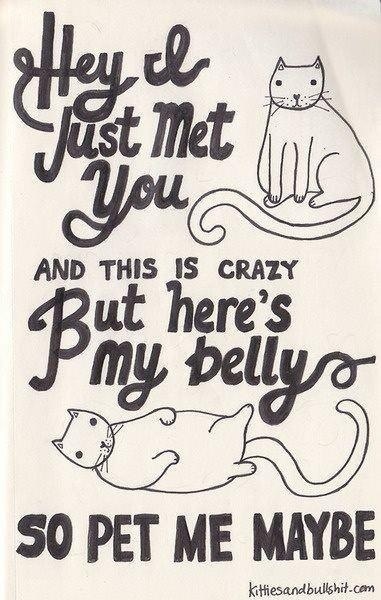 So, as I was googling Cat News today…

I stumbled upon this little gem of a headline. This story is particularly funny to me for three reasons (and the guy didn’t die, so everyone just relax):

But apparently, when Audrey Deen Miller’s husband threatened to hurt the cat, she lost her shit and shot him in the stomach. To read the article written by a more-respectable journalist than myself, you can click here I guess.

More importantly, the cat wasn’t hurt. Most importantly, CATS ARE STILL DICKS. I’d just love to know what shenanigans this little asshole was up to before all hell broke loose.

This isn’t the first blog post like this, and it won’t be the last because cats are selfish and greedy little assholes predisposed to believe that everything you own is somehow theirs. Even though they’re cats, and what the hell are they going to do with a cheese grater? It doesn’t stop them.

Last night I stopped by Hobby Lobby to pick up a few things; one thing being a flower made out of burlap, AKA cat nip, apparently.

Phase 2: Surveillance, AKA “Did Quigley see this?”

Phase 3: Drag Prey to Make Believe Cat Cave and Then Remember You Don’t Have Thumbs. 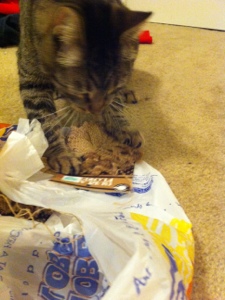 Phase 4: Save Face by Rubbing Your Scent All Over it Instead, AKA: WIN. 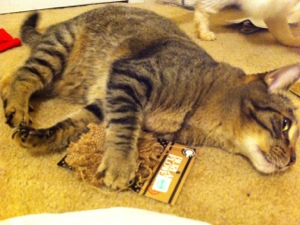 Let me preface this blog by saying I think Kim Kardashian is the biggest douchebag of this century. That said, I’ll watch their reality show until the death of me. 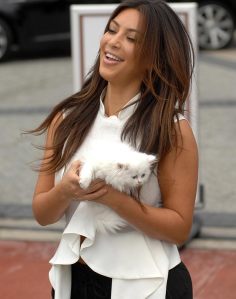 The first thing I’d like to say about this picture is thank god I’m not a celebrity, because my two dickhead cats would NEVER let me carry them around Beverly Hills or SoHo like that. Instead, they’d rip holes in my Dolce & Gabbana clothes and then dart off into traffic and get run over by some rich asshole’s Lamborghini Mercy-elago (see what I did there?).

Secondly, yeah, that cat is pretty damn cute. But guess what it turns into, Kim? 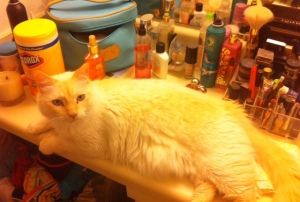 Because this is my blog, I’d also like to say I’m tired of celebrities getting kittens and the entire world freaking the hell out about it and being like, “OMG, DID YOU SEE TAYLOR SWIFT’S NEW KITTEN?” “ZOMG, KIM K GOT A KITTEN, HOW CUTE ARE CATS? I TOTALLY NEED A CAT NOW.” For years, people have called me a cat lady…and all of a sudden these two assholes get cats, and cats are cool. Guess what, assholes? Their cats shed all over the place, throw up on carpet, and shit in a box just like mine do, so enough with the judging.

And, this is just because I hate Taylor Swift:

Maybe she should start writing songs about all the shitty things her cat does to her? Call me maybe, Taylor.

I spy with my little eye… 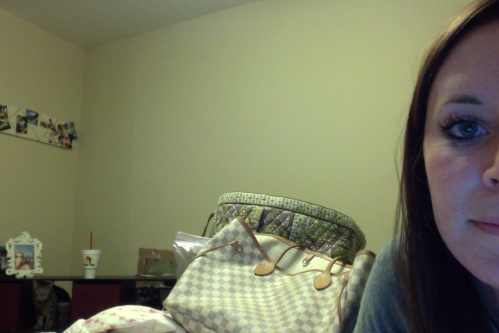 Cats have no shame, and neither do I, because that is definitely a pair of my underwear around his neck. 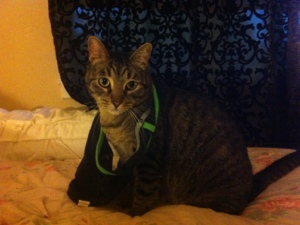 This wasn’t a planned photo either, which is hilarious. I just tossed them on my bed and that’s how they landed. It’s like throwing horseshoes…but with cats.

So I started a new job, a fantastic job that allows me to sleep in. Dream come true right? Not if you have cats.

My new alarm doesn’t go off until 8:30, as opposed to the 7:00 am alarm that my cats have grown used to over the past year.

This is a real problem for their little cat worlds. The last two days have started with me beating them off my pillow and throwing them across the room (dramatization) at 7:15 because I’ve apparently overstayed my welcome in my bed.

People unwise to the dickish tendencies of cats might think this cute. “Aww, they just want to make sure you’re on time for work,” someone might say.

You couldn’t be more wrong if you tried. Cats are evil, hateful, fur-covered little creatures that love ruining people’s days in any way they can.

Sorry there isn’t a picture to accompany this blog. Like I’m thinking clearly in my early morning rages.

You vicious cricket-killer, you. Stop yelling at me.

Caption redacted even though everything about the last episode is literally all over the internet 🤗
The naughtiest ornament on the tree 🎄
Numbers 1 and 2 on the Naughty List this year 😈
Isis 1/6/2006 - 11/26/2022 ❤️❤️❤️ Thank you for being with me for so long. You are loved and will be missed.
Please send good vibes for our Isis kitty… she is almost 17 and seems to be winding down (this pic is from 2 years ago). It’s been a tough week for her and a tough year for us with the kitties. We’re going to take her to the vet on Monday to see what we can do to help her be more comfortable.
Loading Comments...