I know what you’re thinking. “Cat circus? That’s not even a real thing.” Well, you skeptic, it most certainly is a real thing and this blog serves as proof.

Suzanne came to Austin (so, now you know where I live…please don’t stalk me) Friday night. As fate would have it, there was also a cat circus in town the same night. So, duh we had to get tickets to that.

Naturally, we couldn’t show up to this thing sober because neither of us really knew what the hell to expect out of this. And, because it was on the east side of Austin, we weren’t sure if we’d die or not, and no one wants to die sober.

We walked into the little theatre and were immediately warned to close the door because there was a loose cat running around somewhere. We both got really excited at this point and wanted to find the loose cat. Editor’s note: there was no loose cat, so that was some bullshit.

We finally found seats (all six performances were sold out…I’ve truly missed my calling) and waited for the show to begin. The ring master came out, and was dressed like a character from Josie and the Pussycats–I’m talking cat ears and crushed velvet from head to toe. It was purrfect.

She has about 12 different cats kenneled that she pulls out at different times throughout the show, depending on what trick she’s trying to get them to perform–there were a couple hoop jumping cats, a skateboard cat, tight rope walking cat, shopping cart pushing cat, instrument playing cats, tight rope walking cat. I say ‘trying to perform’ because cats are dicks (celebrity performer cats included), and a good 80% of the time she let each cat out of its kennel to perform, it just walked out and stretched and sat down, and begged for its treat like it had done something spectacular.

That’s a cat riding a skateboard. 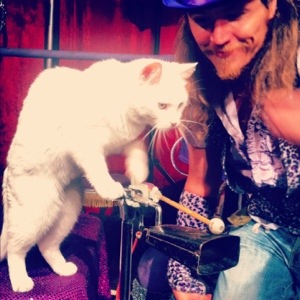 This was the star of the show–a bitchy cat named Tuna. Prior to the show ending, we were warned not to touch Tuna because Tuna is a huge dick who hates humans and doesn’t like being petted and doesn’t enjoy other signs of affection either. So, naturally I tried to touch Tuna (because I WANT TO HUG ALL THE CATS but I can’t) and honestly, I’ve never been more scared for my life. That cat is 100% evil.

Here we are with the star of the show. Suzanne is terrified. And this was before I tried to pet her, so I still thought I stood a chance and could make her love me. I was let down approximately 45 seconds after this photo.

The best part of the entire show actually had nothing to do with cats. A guy in the audience attempted to start a slow clap and it went a little something like this…